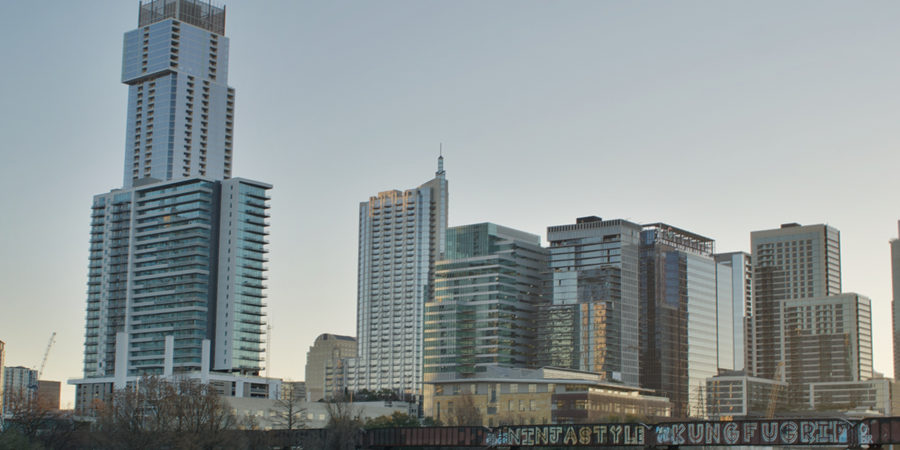 Austin’s apartment market started out the new year with full momentum, according to the Austin Multi-Family Trend Report released today (May 13).

Researched and published locally by Austin Investor Interests (Robin Davis, principal), the data is by far the most comprehensive available on a quarterly basis. Many thanks to Robin for sharing information, and please reach out to her (rd@apartmenttrends.com) to learn more about her products.

Before I submerge totally into the Trend Report, I just wanted to note that Pat Jones, vice chair at Newmark Knight Frank, recently closed a blockbuster sale — a $120 million transaction involving the Millennium Rainey mid-rise at 91 Rainey St.

Two Houston-based entities were in on the sale. Dinerstein Cos was the developer and seller, represented by Jones. The buyer was Camden Property Trust (NYSE: CPT), which disclosed the price in its quarterly earnings report. The 326-unit project — completed in 2016 — is certified LEED Gold. It includes some choice amenities — a rooftop pool and fitness center, dog park and social lounge with kitchen.

That deal will show up in Trend Report’s tabulations next quarter. In the meantime, here’s some interesting data for 1Q:

There were 23 investment sales, involving 6,305 units, January through March. More than 50 percent of those sales were for Class B properties — usually between 10 and 25 years old. The opportunities to buy Class B and even older Class C properties is growing more scarce. Many existing older apartments in Austin have already been purchased and renovated in the last few years to secure higher rents. As such, it’s no surprise that most of the properties now on the market are new Class A properties that will attract big institutional investors.

Of the 23 properties sold last quarter, eight were student housing developments. Only two were near the University of Texas campus. Most were in Southeast Austin along the East Riverside Corridor, where UT years ago had secured more modestly priced housing for students. Over time, those projects have been purchased privately and maintained largely as student housing. However, with the development of the massive Oracle Corp. campus near the Pleasant Valley Road bridge over Lady Bird Lake, many investors are moving ahead with ground-up redevelopment — generating a fair amount of controversy. With more student housing properties in this area changing hands — and more private student housing available in West Campus — the clamor over gentrification in the East Riverside Corridor is certain to continue.

The Trend Report notes a rapidly evolving line-up of amenities for new projects. Hot tubs, microwaves and theater rooms are passé. Dog parks, zen gardens, social lounges and bocce ball/shuffleboard courts are the rage. But here is a sobering thought: operators are starting to charge an additional amenity fee to maintain the perks. And I thought paying extra for water and trash was a bummer.

In terms of development, the Trend Report counts 2,082 new units started across the metro area in 1Q with several large projects in the northeast submarket breaking ground — not previously a sought-after location. Times are a changing. Nearly 16,800 units continue under construction from San Marcos to Georgetown with 800 units at Plaza Saltillo and 654 units at The Grove, the infill mixed-use community near MoPac Expressway and West 45th St.

Class A apartments downtown are now averaging $3.24 per square foot — I remember when breaking the $3 mark was mind boggling. Occupancy downtown is nearly 95 percent. Here are a couple of stunning stats: a downtown efficiency apartment (562 per square foot on average) costs $1,784 a month. The average monthly rent for all downtown units is $2,864.

It’s easy to see why the tower cranes keep cropping up. The next big urban residential push, it appears, will be along the Red River Street corridor between 8th Street and the UT campus. Greystar is planning Symphony Square at 1104 Sabine St. — a site plan was recently filed with the city of Austin. Trammell Crow Residential is building a 30-story tower at 700 E. 11th St. A multifamily division of Lennar (NYSE: LEN) is building a large residential project across I-35 at 12th Street.

Many thanks to Robin Davis for these great insights.